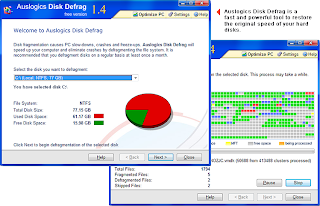 The Fastest Defragger on the Planet

I have experimented with other disk defragmentation utilities besides the one included with Windows XP. I ended up going with Diskeeper and was pretty happy with it through versions 9 and 10. Not that it is a bad product. It was certainly better at defragging my hard drive than anything included with Windows. It had a better, cleaner interface, and it worked more quickly. However, it still wasn't as quick as I would have hoped for. And, of course, being the frugal person that I am, I hated having to shell out the money each year (upgrade or otherwise) to accomplish a task that Windows should do a better job of by itself. But, in case you're interested, Diskeeper 2008 runs $29.95 for the Home version and $49.95 for the Professional version. Only the Pro version works with Windows Vista Business and Vista Enterprise.

What I wanted was a free defragmentation program that does this unpleasant task better than Windows, faster, and for free. Bring on Auslogics Disk Defrag (http://www.auslogics.com/disk-defrag). This utility is just what you need, especially if you have Windows Vista. Vista comes with the slowest defragmentation application ever made, to go along with the slowest operating system ever made. Believe me. Nothing is fast in Vista, and this particular operation is the worst of all. Auslogics Disk Defrag is fast by any standard: XP or Vista. So much so that Maximum PC magazine gave it a Softy Award as one of the 9 applications you simply must install. High praise! Quoting from the magazine:

"Install this defragger on your Vista OS and your blood pressure
will drop instead of rise every time you defrag. XP users can benefit too--the app is also much faster than Windows XP's freebie tool."