We Dumped DirecTV for fuboTV. Here Is Why

When we took a good hard look at our monthly entertainment bill, it became increasingly apparent that something would have to go. We had already cancelled Hulu and our phone land line, but that was still not enough. We still had a huge DirecTV bill that was largely going unused from month to month. Something had to be done. Of course my wife and I were hearing from friends and reading more and more articles about "cutting the cable" and going strictly streaming, instead of using satellite or cable TV. This scared me in particular, because I didn't want to lose the local channels, and in the area where we live, a TV antenna is not a good option. For one, our neighborhood has a lack of broadcast reception from a TV antenna. We tried to buy a digital antenna from Best Buy, and they told us that everyone who has ended up returning it due to lack of channels in our area.

I finally did some targeted research. After finally deciding that the cost savings would be worth it in the long run, I gathered up all of my DirecTV equipment and drove it to the nearest UPS store, which was about two miles away.  Interestingly, UPS will box up your equipment and ship it for you free of charge. Nice! The first replacement product we are trying already seems very good. It is called FUBO TV. The price is $44.99 for the first month and $54.99/month thereafter. What I like about it is that we can use it on any TV in the house, as long as we have the app installed. For instance, we now have an Amazon Fire TV Stick plugged into each of our TVs. The app is on the Fire TV Stick, so we just install the app and we're good to go. It runs off of the Fire TV Stick. Your fuboTV subscription allows you to stream from two devices at a time, so I'm assuming that means two TVs at once, or one TV and a mobile device at the same time. Here is more about fubo TV: https://www.fubo.tv/welcome 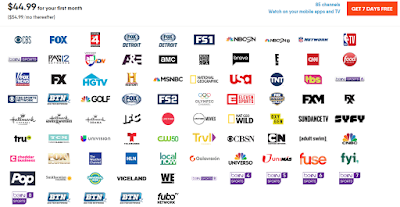 What drove up the price of our DirecTV the most was that we had a Wireless Video Bridge (an expensive accessory which resembles a tiny DirecTV satellite), four small DVR/receivers (one for each room) and the big Master Genie DVR from which all of smaller ones connected. So we had five different pieces of hardware plus a satellite dish outside the house. And we paid for each of these accessories a la cart. So the total amount we were paying was around $150/month just for DirecTV. By returning all DirecTV hardware and removing the service completely, keeping our Internet service and then getting fuboTV instead, we are saving about $95/month or $1,000+/year. fuboTV is about the same price as YouTubeTV. Other options include Sling TV (which is cheaper but not as many features or channels), Hulu TV and others, too. But here are the features I like best about fuboTV:
The emphasis of fubo TV seems to be sports, but you get the major networks, shows, many streaming movies, etc. At least as many as you would get from your cable company, and probably much more. Again, it is a combination of both On-Demand and Live channels.

Of course we are big-time streamers, so we also have subscriptions to MLB TV (so that I can watch my beloved Washington Nationals games and any other MLB games I want to see), Netflix, the Criterion Channel and Amazon Prime Video. All of these live on the Fire TV Stick too, so they are also available on every TV that has a Fire Stick plugged in.

I really like the combination of local sports, good video quality, local news channels, all major networks, cloud DVR and a user-friendly guide. We may try Sling TV and YouTube TV, but so far we're pretty happy with fubo.