How to Place Text on Top of a Picture or a Picture Behind Text in Google Docs: The Workarounds

June 09, 2020
Here is a common question from a Google Docs user: So here's the deal...I would like to insert a picture into a Google Doc. I would like the picture to be behind the text. I looked up online for an answer, and found that I must:

Insert the picture as a drawing.

Add a text box to the drawing and insert the text.

Great question. Unfortunately, you have hit on one of Google Docs' biggest flaws/limitations. It has no "Behind Text" text wrapping feature. Microsoft Word does have this feature though (see my screenshot below). I'm not sure what you are creating, so I'm not sure if it is something you could do in Microsoft Word instead. Also, many peple out there simply don't have a full-blown licensed version of Microsoft Word.

What I did below was to insert a photo and then type some text, click on the Text Wrapping button, and then chose Behind text. Then, I used the Windows Snipping Tool (found in nearly every version of Microsoft Windows), and I "snipped" the image below, chose Copy and then Pasted it into the Google Doc. So, you'd be bringing it from Word into the Google Doc. This would work also. Again, it's a bit cumbersome.  I have a few other ways, also (see below). 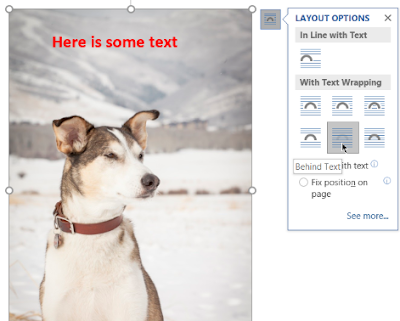 You mentioned using Google Drawings to Insert a Drawing and adding a Text Box within Google Drawings. This would also work, and it would be easy to add the drawing to your Google Doc. Just click Insert>>Drawing, add the photo and text box in Drawings, and pop it into your Doc. So that's another method, because Google Docs does not have the ability to add a text box itself, it must use Drawings for this feature.

Maybe the best way overall would be to use Google Slides because it does have an Insert>>Text Box option. Just one more way in which Google Slides is far more versatile and powerful than Google Docs. If you used Slides, you could position the text box on top of the image and then position the image within the slide. The slide could also be re-sized similar to a typical Doc layout by going to File>>Page Setup and choosing Standard 4x3 from the drop-down menu. It would be easier to drag the photo so that it fills the entire slide this way. When done, you could go to File>>Download as>>PNG Image and it becomes a saved photo you can insert into your Google Doc if you wish. This is the method that I use when I make my fancy print tutorials with all of the screenshots, arrows, and text boxes.

All of these methods are cumbersome to a point, only because Google Docs does not have the Insert>>Text Box or the Text wrapping>>Behind text option.  But the methods explained above are all good workarounds which only take a few more seconds each.